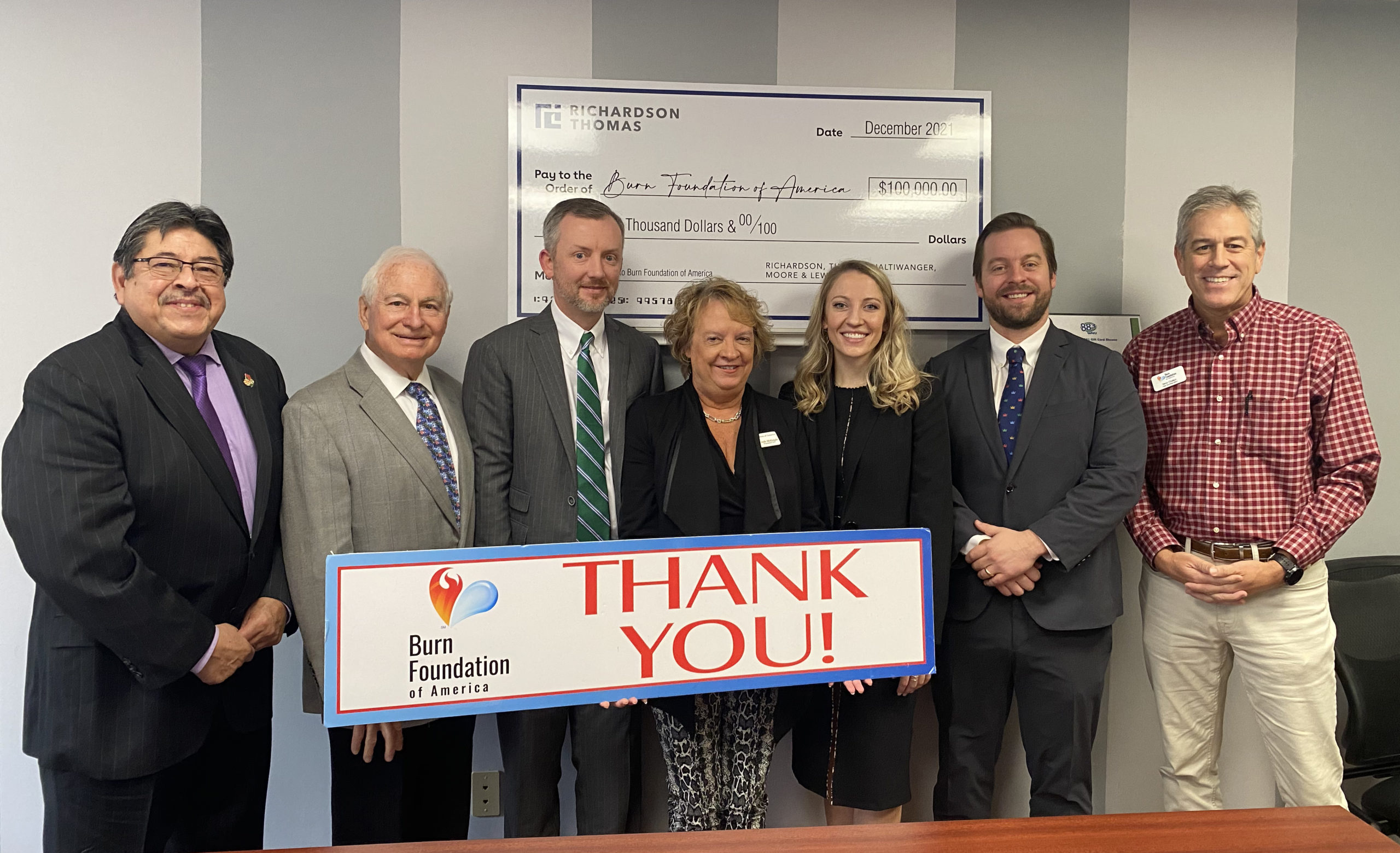 Richardson Thomas, which has represented many burn victims treated by the Joseph M. Still Burn Center in Augusta, has made a gift of $100,000 to the foundation that supports patients and their families through their ordeals.

The South Carolina law firm made the presentation to the Burn Foundation of America at the foundation’s office on Thursday, Jan. 20. The donation is intended to support the foundation’s Jeffrey Vaden Chavis House and other vital services provided to burn victims and their families.

The firm learned of the foundation and its work through representing dozens of people who had been injured in explosions caused by the faulty designs of plastic gasoline cans. The lawsuits have resulted in dramatic change across the nation – federal law now requires that the cans be made to be explosion-proof, and the industry has changed the way it makes the cans.

The legal actions also resulted in the attorneys at Richardson Thomas being deeply impressed by the work done saving lives and relieving suffering at the Burn Center, and by the way the foundation has supported the victims and their families.

“We;ve had a lot of people go through the center – people who were our clients, and became our friends,” said Brady Thomas, a partner in the firm who has represented victims of dozens of such explosions across the country. “We became familiar with the house the foundation has where they put up families of burn patients. It is a great thing they do for those poor families, the loved ones.”

“We wanted to give back,” he said, explaining that the gift is intended support the house, travel expenses for the families, and “anything else they need it for.”

Among the explosion victims who have been clients and patients at the Burn Center is Jim Puckett, former mayor of the town of Fitzgerald in the southwestern part of Georgia.

On Jan. 16, 2010, Puckett was trying to make a fire in his backyard when a gas can in his hand exploded. “I ran and jumped in the pond, and I literally heard myself sizzle.” He didn’t know it, but he had third-degree burns over 65 percent of his body.

“Next thing I knew, I was on the helicopter to the Burn Center,” which was a three-and-a-half-hour drive away. He doesn’t remember much until 63 days later, when he awoke to see members of his family wearing tee shirts that said “Puckett Prayer Warriors.” It was then he realized, “I’ve been here a long time.”

During that time he was kept in a medically induced coma while he underwent 18 surgeries. Some of those treating him, they later told him, did not expect him to survive.

But he did, and now, to him, “The Burn Center is a very special place. I can’t even talk about it without tearing up.”

The gift to the foundation will go to help other patients like him, and their families.

“It is a great blessing to receive this generous gift from Richardson Thomas,” said Linda McKnight, president and CEO of the foundation. “Words cannot express how appreciative we are for this tremendous support for the work we do.”

About the Burn Foundation of America

The Burn Foundation of America provides assistance to burn patients and their families. This includes lodging, meals, transportation, medication, and anti-scarring garments – all free of charge. We believe in the healing power of having your loved ones nearby during the recovery process, which is where our motto comes from: “Family is powerful medicine.” Among other services, the foundation operates the Jeffrey Vaden Chavis House, a 40-bed guest house in Augusta where families of burn patients at the Joseph M. Still Burn Center can stay at no cost. Learn more: https://www.burnfoundation.net/